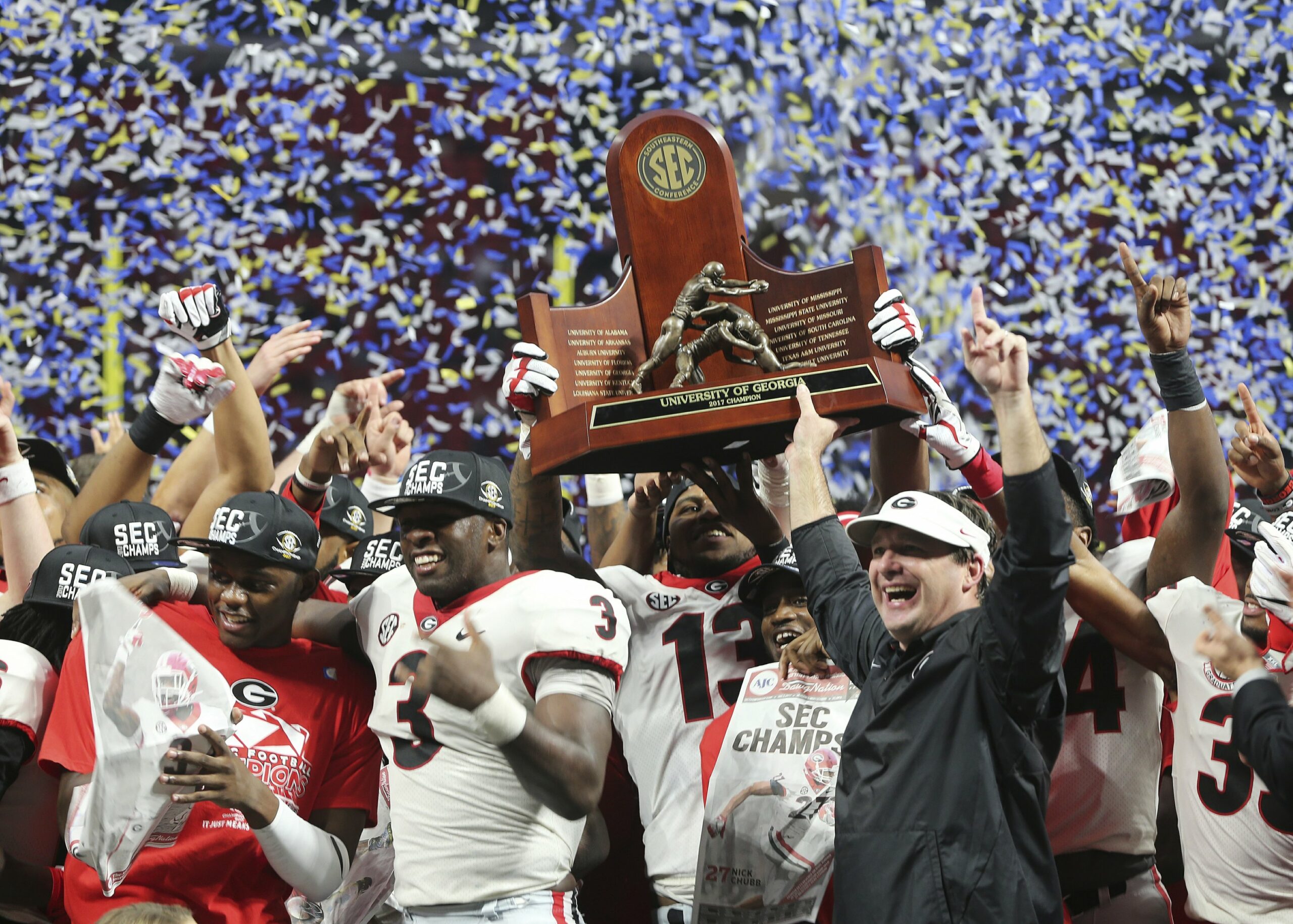 It doesn’t matter whether you’re rooting for the Vols, the Jayhawks, or the Hoosiers; sometimes, you can’t catch a game in person. And, if you don’t have cable, you might think you’re out of luck if you want to watch your favorite team touchdown. Fortunately, the internet, and more specifically the availability of online streaming services, means you don’t have to sit around and wish you were at the game. With the right apps, subscriptions, and devices, you can catch all of the action anytime and anywhere.

If you are looking to watch college football, but you’ve already said sayonara to expensive cable contracts, keep reading for a few ways you can watch when you’re ready.

Fubo TV is, without question, one of the most popular streaming services for sports lovers. Its most popular subscription, which costs $64.99 per month for more than 100 channels and no contract, offers several networks where you can catch your favorite college players doing what they do best. Through FuboTV, you have access to the always-important ESPN family of channels plus:

If you don’t mind spending an additional $9 each month, FuboTV even gives you access to its Sports Plus add-on package, which includes the PAC-12 Network. FuboTV allows you to watch on two different TVs or devices at once, so you can stream from two rooms and never miss any of the action. And, when college football season is over, you still have access to baseball, hockey, NASCAR, golf, boxing, MMA, and more.

Sling has a Ton of College Football Streaming Action

Good news for those of you interested in Sling: the popular streaming service offers a host of channels perfect for watching college football without cable. Even better news is that Sling has a free option if you’re not quite ready to commit to one of its paid-tier packages. However, since you’re looking for college football, you’ll likely need to sign up for both Sling Orange and Sling Blue, which cost $35 each per month and give you access to:

Like most streaming services, there are no contracts to sign up with Sling, and you can change your service selection at any time without penalty.

Another fan favorite, Hulu + Live TV is, at $64.99 per month, similarly priced to most streaming services. What sets Hulu + Live TV apart is the sheer amount of content available. Hulu users have access to:

An added perk with Hulu + Live TV is that you’ll also get unlimited screen viewing. Plan a watch party and have your games playing indoors, outdoors, and everywhere in between. A side note here for college students: You can get Hulu for just $1.99 per month; this won’t get you the live tv experience, but it’s a great deal worth noting.

A scaled down-user experience, Vidgo is a relatively new player in the game of streaming television. At $55 per month after a $10 trial, Vidgo has a reasonable lineup of sports channels, including:

If you’re looking for Spanish television, Vidgo’s Latino lineup has you covered here as well, and, for the sports lovers among you, includes:

YouTube needs no introduction, but YouTube’s streaming and live TV service might. For $64.99 per month with nationwide availability, you can watch NCAA football to your heart’s content and even go back and watch prior games when you just have to scratch that pigskin itch. With YouTube, you get 85+ channels that include everything you need to watch college football without cable, including:

Signing up for YouTube TV is easy. The service comes with six household accounts and unlimited DVR storage on the cloud.

ESPN+ is not a fully immersive solution if you’re looking to watch live games. However, for about $6 per month, you will have access to supplemental materials and even some lower-tiered schools’ games. This is an excellent option for those of us who can’t get enough just by watching games as they are played. And, if you’re looking for a gift for the sports lover in your life, you can buy a gift card for a year’s worth of ESN+ for $59.99

Looking for non-televised events? College Sports Live is the answer, and this online streaming service features more than 50 schools from coast to coast. With more than 20,000 live events streamed each calendar year, this CBS service is, like ESPN +, an affordable supplement to your college football addiction. For $9.95 each month, you’ll have unlimited access to everything on the site, which also includes college and amateur swimming, wrestling, weightlifting, baseball, and more.

If you’re not big on monthly fees, you can watch many games live on network television with a simple TV antenna. Typically less than $30, this one-time fee option gives you access to your local channels, including FOX, ABC, NBC, and CBS. Over-the-air antennas stream in 1080p HD. The biggest drawback here is that games are televised regionally, so what you get is subject to availability in your area. Still, it’s a highly affordable option for those that don’t want a recurrent monthly bill.

Okay, so now you know how to watch your favorite college football, but you don’t have a device to stream it from. Never fear because the top five are listed below.

The Amazon Fire TV Cube is one of the most powerful streaming devices on the market today. Not only can you access 4K content, but Amazon’s devices also support just about every app you can think of, from HBO Max to YouTube TV to Prime Video and Netflix. Something interesting here is that you can control other devices, such as your soundbar/surround sound system, directly from your Fire Cube with the built-in Alexa feature.

The Amazon Fire TV Cube retails for $119.99 and is almost always available for same or next-day delivery.

The Amazon Fire Stick might not be quite as powerful as its big brother, the Cube, but, like the larger version, it also offers access to 4K Ultra and with Alexa preinstalled on the separate voice remote. Something else to consider with the Fire Stick is that it’s completely portable and only needs a USB connection for your device to work with virtually any television.

The Roku Streambar was released in 2020 and allows you to not only stream your television but also delivers fully-calibrated Dolby audio. The Streambar’s sound capabilities ensure that you’ll never miss a moment, even if your head is turned away from the screen during an unexpected touchdown. With everything you need packaged in the box, this is easily your next favorite plug-and-play device that also happens to be compatible with Alexa.

The Roku Streambar is $129 by itself, or you can enjoy a full surround sound for around $450.

A less expensive version of your favorite streaming device, the Roku Express 4K features a smart remote that controls your television and other devices. With the availability to stream everything you want, from wherever you want, the Roku Express 4K is a viable option for those with very little shelf space or that prefer a minimalist approach to their entertaining areas.

For the Apple crowd, Apple TV is another great choice for streaming your favorite football games. Supporting Dolby Digital +7.1 surround plus HD video, Apple TV puts you right in the middle of the action. Plus, when the game is off, you can play your own on the Apple Arcade or listen to music through your TV or AirPods.

Apple TV isn’t the least expensive option at $169 for the 32 GB 4K version, but it comes with access to Apple TV+.

Planning to be away from home during your favorite game? Take a VPN with you. A virtual private network lets you use your computer to log in to regionally restricted games. Keep in mind, however, that this is not a perfect solution, but it is an affordable way to bypass blackouts if you’re going to be traveling.

Each college football team plays about a dozen games each year, meaning you have plenty of opportunities to catch all of the collegiate action you desire. But, if you don’t have cable, you may have to get creative in your streaming selections. Each of the options above can put you closer to your favorite teams so that you don’t have to miss a minute of the sports you love.