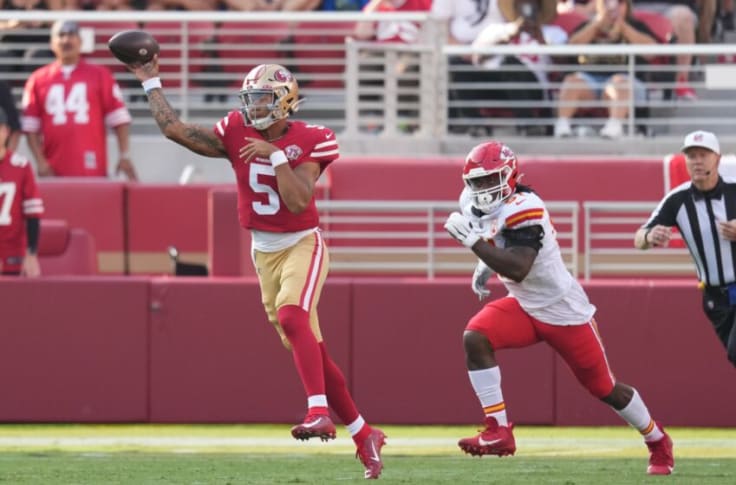 Watching the San Francisco 49ers online shouldn’t be a chore.

One of the most prominent charter members of the All-American Football Conference, the San Francisco 49ers became an official NFL team during the league merger of 1949. Taking their name from the famous group of prospectors that moved to San Francisco during the 1849 Gold Rush, the team would’ve made those fortune seekers proud.

The San Francisco 49ers have played in the Super Bowl seven times, winning in 1981, 1984, 1988, 1989, and 1994. With 20 division championships between 1970 and now, they are one of the winningest teams in the NFL. Team mascot, Sourdough Sam is one of the most energetic in the league, and is also known to promote healthy lifestyles in young 49er faithfuls.

Throughout the team’s history, the gold-blooded Niners have struck it rich in three different stadiums, first Kezar Stadium then Candlestick Park. In 2014, Santa Clara-based Levi’s Stadium became the most recent home of the San Francisco 49ers. The San Francisco 49ers have been blessed with many Hall of Fame players throughout the years, perhaps most famously Joe Montana, a 1979 third-round draft pick that was with the 49ers from 1979 until 1992.

If you’re ready to watch the current roster of talented players, you have two choices: pay for cable or cut the cord forever. Choose the latter? Streaming services below are great places to start.

If your fall goal is to watch every San Francisco 49ers game, a great place to begin is by signing up with Hulu + Live. The streaming service’s no-ad package includes ABC, FOX, the NFL Network, and both ESPN and ESPN2 at no extra cost. The best part about Hulu is that you don’t have to sign a contract, and you won’t have to wait on a technician to come and install your new service. Why? Because the Hulu app is most likely already compatible with your smart television, Roku, Amazon Fire TV, and every other connected device in your home.

Sign up for Hulu today using your existing device.

Fubo Means You Get The San Francisco 49ers Without Cable

Are you looking for news about the San Francisco 49ers? Want to watch games? Fubo makes it possible. As the premier sports streaming service, you’ll get RedZone, NFL Network, ESPN, FOX, CBS, and much more, starting at less than $65 each month. You can watch now, cancel later, and restart your service any time. Fubo goes with you wherever you go, and you can even download the service to your gaming system and smartphone.

Fix your football problems by downloading the Fubo app today.

Did Someone Say Sling? The San Francisco 49ers Did!

One of the most affordable cable alternatives available today, Sling doesn’t require a long-term contract, and you can take your channels with you wherever you go. Perhaps more importantly, when you add an HD antenna to your streaming device, you get access to your local channels (NBC, CBS, ABC, and FOX) at no extra charge. These channels are your best bet for watching primetime San Francisco 49ers games. But, you can also enjoy football on ESPN, FOX Sports 1, and more.

If the San Francisco 49ers are playing on the most popular sports channels, Sling has them.

Don’t live in the United States? NFL Game Pass gives you live access to the San Francisco 49ers. However, those of us that live in the US will have to settle for replays after the final whistle – Thursday night games are not available for 72 hours. NFL Game Pass also has a treasure trove of on-demand shows that go behind the scenes of all your favorite teams. Sign up for your free trial, and then be ready to pay just $99 per season.

The San Francisco 49ers Are On The Radio, Too

The San Francisco 49ers certainly make for an impressive spectacle on the screen. But, you can’t always be tied to your TV. Fortunately, the radio has you covered. Tune in to all of the action with professional play-by-plays and calls on SiriusXm, WestwoodOne, or on NFL Game Pass.

San Francisco 49ers Games May Stream Better With A VPN

Without getting too technical, a VPN (virtual private network) is a digital service that essentially wraps your online activities in a protective barrier. This can help you bypass unfair geographic restrictions when you’re trying to watch San Francisco 49ers games and you don’t live in California. But, a VPN – we suggest NordVPN – also has another benefit, and that is that you can choose servers from all over the world to find one that has the least traffic. This can result in a better streaming experience and less interruptions on game day.

You don’t have to be a prospector to watch the San Francisco 49ers strike gold, but you do have to have a way to watch them.