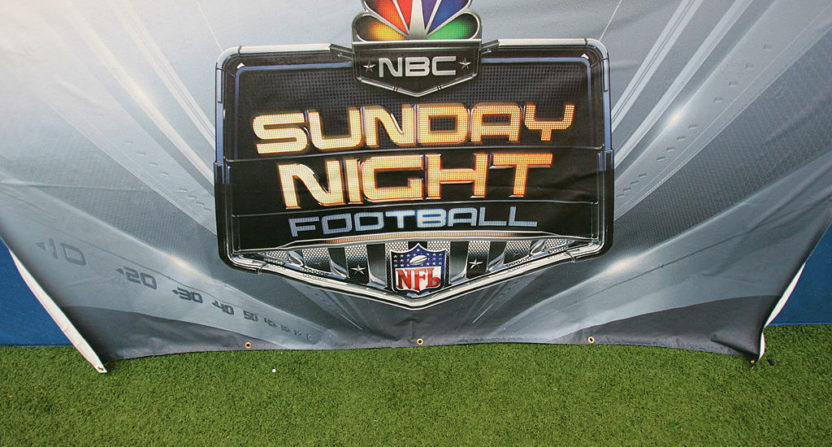 Sunday Night Football streams online, and you can find it with the services listed below.

Sunday Night Football is as much of a tradition in America as turkey on Thanksgiving. And, up until about a decade ago, you had to sit in front of your television with a cable contract in hand or have a bulky antenna to watch these Super Bowl-worthy matchups. Not today. Today, you can watch SNF online through your favorite streaming service.

Sunday Night Football airs on NBC, a contract the network has held since 2006. Before that, from 1987 through 2005, ESPN showcased Sunday Night Football. ESPN took over from TNT, although there was a 10-year gap where both networks had access to Sunday night games.

For the 2021 season, Mike Tirico and Al Michaels serve as announcers for Sunday Night Football on NBC. If you’re ready to listen to these two seasoned sportscasters dole out a bit of NFL wisdom each Sunday night, the following streaming and online services are your passport to the action.

Fubo was established on the premise that there wasn’t a television streaming service dedicated to sports. Well, now there is. Depending on where you live, you may have access to more than 200 channels, including dozens of sports stations. Fubo Elite subscribers can expect to pay $79.99 per month for a huge lineup of sports, including NBC Sports Network and NFL RedZone. One of the biggest benefits of streaming this cable alternative is that you can record 250 hours of television at no extra charge. In other words, you don’t have to miss your favorite Sunday evening shows during football season; you can record them and catch them the next day. Most importantly, Fubo’s availability across most devices, including your television and iPhone, makes it easy to watch Sunday Night Football anytime and anywhere.

When you need all the action on Sunday nights, Fubo has you covered.

Hulu’s $64.99 live television package is a great option for those looking for live sports on NBC each Sunday. However, for the ultimate football and family package, get the Disney Bundle, which offers live television for $72.99 per month and gives you access to Hulu, Disney+, and ESPN+.  If that’s still not enough, you also get 50 hours of cloud DVR, and you can watch the vast majority of new shows the day after they air. Once you download the Hulu app and sign up for service, you’ll have immediate access, and you can cancel anytime.

Hulu + Live lets you stream Sunday Night Football on your own terms.

Sling is another great option for fans of Sunday Night Football. It only ranks lower than Hulu because you can’t easily bundle it with other apps. However, when you sign up for the $50-per-month Sling Orange + Blue package, you’ll have NBC (depending on your market), the NBC Sports Network, and the NFL Network. You will also have access to live broadcasts on ESPN and its sister stations, ESPN2 and ESPN3. If you don’t mind an antenna, Sling even lets you stream your local stations for free. With the channel bundle, you’ll also be able to view from four different devices at once, and you can watch live or on-demand content on your smart device, streaming box, or connected television.

If you’re looking to watch Sunday Night Football in Spanish, you’ll need NBC’s Universo. This channel is available through Hulu and Fubo, although you may be required to purchase additional service for access. If you can’t find Universo through your favorite streaming service, the Telemundo Deportes channel  – which is also owned by NBC – still has you covered.

Peacock is NBC’s streaming app, and you can have access for just $4.99 a month. However, for a better experience, upgrade to the $9.99 Plus service, which gives you access to all premium sports, live events, and ad-free viewing. Sunday Night Football coverage begins at 7 PM Eastern and airs simultaneously with live coverage on NBC. As an added benefit, you’ll also get to stick around for the Peacock Sunday NFL Final Post Game show that covers the best touchdowns and tackles from the game.

No matter where you live, you’ll be subject to blackouts and regional restrictions. This is due to a contractual agreement between the NFL or other pertinent sports leagues and the broadcast network provider that owns rights to distribute the game. A VPN (in this case, we recommend NordVPN) can help you bypass some of these restrictions. But, more importantly, when you stream Sunday Night Football through a VPN, your personal data is safe. NordVPN not only blocks malicious websites and hackers, but it also works on the vast majority of your devices and offers unlimited bandwidth.

Sunday Night Football just got a whole lot more accessible. You no longer have to have a cable subscription or an antenna access games to close out your weekend. The streaming services and apps above are your best bet for a seamless streaming experience.