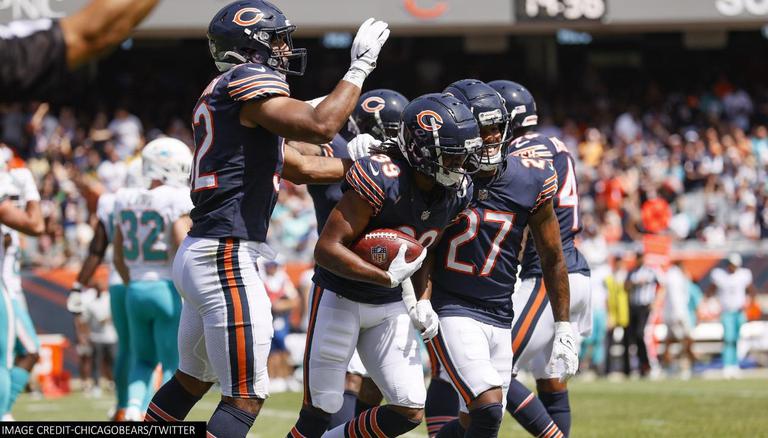 Watch the Chicago Bears online, streaming from your favorite device, and see why the Monsters of the Midway have been a fan favorite for more than a century.

“Da Bears” is more than just a nickname for the team that has called Chicago home for more than 100 years. Originally dubbed the Decatur Staleys and then the Chicago Staleys, the Chicago Bears have called Soldier Field home since 1971 (barring the 2002 season at Memorial Stadium). Like many football teams of the era, the Bears originally started as a private team, which was owned by the AE Staley company based out of Decatur, Illinois.

The Chicago Bears have an impressive history, and the team has appeared in the playoffs 27 times since 1933. The navy, burnt orange, and white uniformed Bears also have won nine league championships, four division championships, and 19 conference championships. On January 26, 1986, the Bears also reigned victorious at Super Bowl XX with a 46-10 victory against the New England Patriots.

Today, the Chicago Bears continue to be owned primarily by descendents of the team’s second owner, George Halas, who purchased the rights to the club from the Staley company in 1921 for $100 (approximately $1360 today). If you ask us, that’s the best $100 ever spent, and now you get to reap the rewards by streaming your favorite team online. Here’s how.

The Chicago Bears are one of the most action-intensive live sports teams in the NFL. You can catch them on one of Hulu’s many dedicated sports channels, including ESPN and ESPN2. For a customized viewing experience, let the app know your team, and sit back, relax, and watch the recommendations come across your screen. No cable is no problem if you stream through Hulu. Keep in mind that you will need the $72.99 per month package for live ESPN. But, take heart knowing that that also includes Disney+ for the kids and dozens of other channels for everything from sports to lifestyle and entertainment.

Sign up for Hulu+ Live for $64.99 per month, and you’ll still have lots of great sports channels.

Sling Is A Great Option For Live Streaming The Chicago Bears

Live sports, no contract, and about 1 million other things to watch? Sign us up. Sling let’s you cut the cable cord and stream your favorite shows, including Chicago Bears games, from your television or, for those of you on the go, your mobile device. For the most avid sports fans among you, Sling’s Orange & Blue package plus Sports Extra includes everything you need to watch online, including The NFL Network and ESPN. Package is $50 with Sports Extra adding $11.

Sling is a logical choice for sports fans.

FuboTV offers hundreds of channels (although some are restricted by location) that work well for every Chicago Bears fan. FOX, NBC, ESPN, NFL Network, and many more are yours on demand. You can even choose to stream a game live or record it to watch later. FuboTV offers three basic service packages, which start at $64.99 per month. Need sports in Spanish? You can catch 100+ sporting events with FuboTV’s Latino Quarterly option for $33 per month.

When football is on the agenda, FuboTV lets you watch without cable.

Watch The Chicago Bears For Free On The Team’s Website

Live locally and want to watch primetime games only? The official Chicago Bears website is an unfortunately geo-restricted option. However, if you run Safari iOS, you’re in luck. Check your local listings to see what’s on, and don’t forget to set your location services to allow the site or its companion app to see your phone.

Amazon Prime customers have something to look forward to this football season. It’s that the Chicago Bears and the rest of the NFL will be streaming live from its prime video service starting in the 2021 season. In 2022, Amazon is the only way to watch TNF thanks to a multi-year agreement with the NFL.

If you’ve never watched TV with a VPN, you’re in for a treat. What you may not know is that many networks restrict what shows are on based on where you are.  If you live in the local market but travel, you may just find that a VPN service helps you feed your Chicago Bears cravings. Simply login, find a network, and stream from your favorite service or website. Try out our top pick NordVPN today.

If you want to watch the Chicago Bears without braving sweltering heat, bitter cold, or pouring rain, streaming from home is the answer. The services above won’t require cable, and you are free to watch whenever you want.